Home/Blog/‘Ignorance cause of increase in Rhesus factor’ 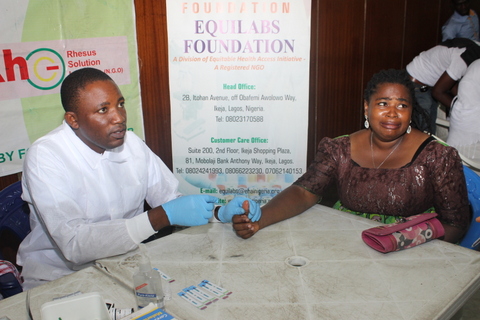 This, she said, accounted for the high rate of still births and loss of babies due to Rhesus incompatibility. Rhesus negative is the absence of the factor of the surface of the red blood cells of some people. About 16% of the human population is said to be Rhesus negative.

Speaking at a seminar to mark RSI’s10th anniversary in Lagos.

Mrs Banire said Rhesus incompatibility, which might lead to haemolytic disease of the foetus/newborn, was one of the most-silent but preventable contributors to the high rate of infant  and maternal mortality in the country.

At the seminar with the theme: Every Life Counts, Mrs Banire said  that RSI’s estimates showed that there are about 216,000 Rhesus Negative women in Lagos.

She said: “Research conducted by RSI puts prevalence of Rhesus negative women who may be at risk of complications from rhesus incomparability at about 6.01 percent of the sample population. Previous research has also put the prevalence to be between five and 9.5 percent, this may seem small but not negligible compared to the size of the population. We believe that every life counts and in this regard we have been able to donate over 1500 Anti D Immunoglobulin (Rhogam) across General and private hospitals. We have been able to reach over 3000 rhesus negative women.”

She decried the high cost of the AntiDImmunoglobulin, Rhogam, which can save babies, from N19,000 to N25,000, saying that it is getting out of the reach of women who need it. She said RSI was informed by the level of ignorance about Rhesus incompatibility among young women who had miscarriages and stillbirths.

Mrs. Banire said part of the NGO’s objectives was to promote awareness about Rhesus, and the organisation had, therefore, organised and participated in more than 100 awareness campaigns in conjunction with various religious groups, government agencies, corporate organisations and other NGOs. “In partnership with the Lagos State Ministry of Education,we organised school awareness outreach for students of secondary schools across Lagos. I call on corporate bodies, representatives of government, individuals to assist the course by supporting the humanitarian efforts,” she said.

She shared her experience: “I have been lucky to have been spared the emotional roller coaster that comes with child loss, partially due to early knowledge but there are millions of people, especially women who are still suffering due to ignorance, who cannot afford regular meals not to speak of affording treatment injection of N25, 000 sometimes during pregnancy and definitely within 72hours after childbirth. This, therefore, becomes our conscious duty to play our part in assisting humanity.We need to recognise that the government has numerous pressing needs to meet in our society and it is up to us to take up responsibility for the things that we can do within our limited resources.”

Consultant Haemotology/Executive Secretary, Lagos State Blood Transfusion Service, Dr. Modupe Adebimpe Olaiya. said Rhesus factor is a protein found on the surface of the red blood cells and can be inherited from parents.  “Rhesus incompatibility comes in when the mother is Rhesus Negative and the baby is Rhesus Positive. First child of a Rhesus Positive mother is likely to escape but what happens with the second and subsequent children?

“If a rhesus negative woman carries a rhesus positive foetus, the incompatibility (dissimilarity) in their rhesus status can make the mother to form antibodies against the foetal RBCs and that in turn can lead to miscarriage, stillbirth or Haemolytic disease of the newborn. Rhesus isoimmunisation can be prevented if sensitisation is avoided.”

Wife of the Lagos State Governor, Mrs Bolanle Ambode, who was represented by Engr (Mrs) Mosumola Olulade, urged every pregnant woman to visit any recognised hospital or the Lagos State blood transfusion services available at all public hospitals and ensure that their children are tested for Rhesus factor, genotype.

“Everyone needs to get involved because the government cannot do it alone. Therefore, I urge corporate organisations and public spirited individuals to donate generously to this course and also join the campaign to enlighten and educate the public that Rhesus factor and compatibility to our women.”