Home/Blog/RhoGAM at 50: A Columbia Drug Still Saving Lives of Newborns 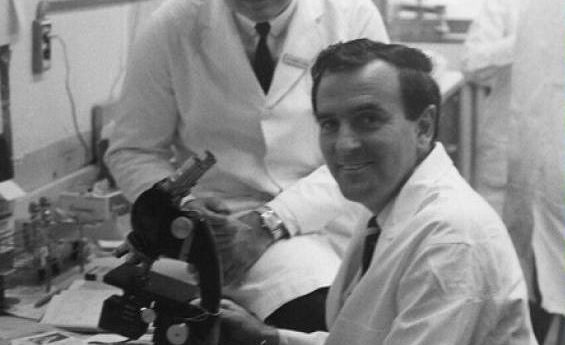 Although the factors that cause Rh disease are still present, the disease is almost completely prevented by RhoGAM, a vaccine developed in the 1960s by physicians at Columbia University Vagelos College of Physicians and Surgeons and still used today. On Feb. 5, Columbia researchers and physicians, along with guests from around the world, gathered at P&S to celebrate RhoGAM’s 50th anniversary.

“I still marvel at how a low-tech solution could have such impact,” said John Gorman, MD, former director of the blood bank at NewYork-Presbyterian/Columbia University Irving Medical Center and co-creator of RhoGAM, to the audience gathered for a panel discussion to celebrate his vaccine. “It’s the most cost-effective drug ever produced. There have been no fatalities in 50 years, and it saves $1 billion every year by preventing high-risk Rh pregnancies. Plus, there’s peace of mind for Rh-negative mothers. How lucky can you be?”

Rh disease can develop when a woman with Rh-negative blood is pregnant with an Rh-positive fetus. In these cases, when fetal red blood cells cross into the mother’s circulation—usually at delivery—the mother’s body begins producing antibodies that can attack and kill a fetus’ red blood cells. It takes some time to produce such antibodies, so the first Rh-positive child is typically spared. But each subsequent Rh-positive fetus increases the odds the mother will become “sensitized” to the fetus.

Once a woman is sensitized, her antibodies can cross the placenta to destroy the red blood cells of her fetus, which can lead to miscarriage, brain damage, or the newborn’s death. Roughly 15 percent of American women have Rh-negative blood, so the problem facing obstetrics and gynecology is immense.

Gorman set out to cure Rh disease together with a Columbia obstetrician, Vincent Freda, MD, and William Pollack, PhD, chief research scientist at the Ortho Pharmaceuticals lab. Two physicians based in Liverpool, England, Cyril Clarke, MD, and Ronald Finn, MD, were independently pursuing the same goal. In addition, Alvin Zipursky, MD, a Toronto-based pediatrician, who was working in Winnipeg at that time, was studying the extent of the transfer of fetal red blood cells into the maternal circulation throughout pregnancy and at parturition. 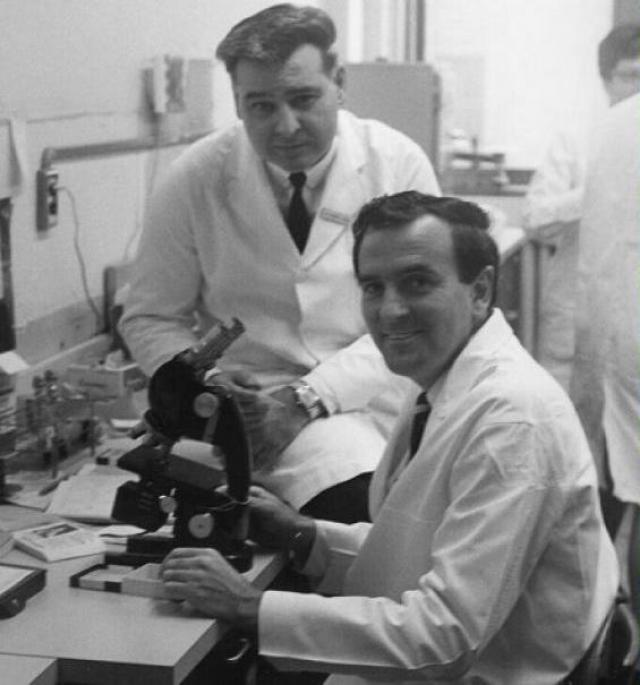 By the early ‘60s, when the researchers started their work, much of the scientific foundation for such a treatment had already been laid. It was known, for instance, that Rh disease would not occur if the Rh-negative mothers did not develop the antibodies. It was also understood that injecting someone with antibodies made by other people against a given antigen prevented the recipient from producing her own antibodies against that antigen.

That suggested to Gorman and Freda that administering anti-Rh antibodies to an Rh-negative mother soon after delivery would prevent sensitization to the Rh antigen and subsequent Rh disease. Technically, the breakthrough made by Gorman and his colleagues had been possible since 1941, when Philip Levine discovered the cause of Rh disease. It just did not occur to anyone to put it all together.

“Vince Freda and Bill Pollack grasped this triple conjunction immediately,” Gorman said. “And they had the will and the resources to do something about it. They turned this idea into reality, doggedly overcoming difficulties, withstanding the immediate pushback, doubt, and skepticism of virtually the whole blood bank community.”

Perhaps the skeptics had a point: Rh immune globulin (RhIg)—the anti-Rh antibody in the RhoGAM vaccine —is paradoxically the same agent that causes Rh disease and can kill babies in the womb. And stranger yet: The more “dangerous” the antibody, the more effectively it prevents sensitization.

“But there it was: RhIg, a fully optimized molecule, in plentiful supply from the legions of Rh mothers already Rh-sensitized,” said Gorman. “No need for clever chemists to synthesize, fine-tune, and test a novel molecule, as is the case with most new drugs.”

In the mid-60s, Gorman and Freda obtained anti-Rh antibodies from Pollack and showed that they prevented sensitization in Rh-positive subjects. This helped pave the way for RhoGAM’s official regulatory approval in the United States in 1968.

The benefits were immediate. The first person to receive the approved drug received the injection mere hours after it became available. Her name is Marianne Cummins, and she, her husband, and her physician, David Landers, MD, were also present in February to tell her story.

In 1968, Cummins was 29 and pregnant with her third Rh-positive child but had not yet become sensitized. RhoGAM prevents sensitization altogether—as long as it’s administered within 72 hours after delivery. She had read in the newspaper about the new treatment, which was to be released on June 1. However, her due date was May 27. If she delivered on time, she would miss the chance to use the drug by one day.

Coincidentally, Cummins’ husband had connections at Johnson & Johnson, the owner of Ortho Diagnostics, which produced the vaccine. He leaned on those friends, who in turn lobbied the Division of Biologics Standards (the forerunner of the FDA), which then approved this type of new drug. Their efforts paid off: The release date was moved up to May 29 and on that day, at Holy Name Hospital in Teaneck, N.J., Cummins became the first person to receive RhoGAM. She would go on to have another child, but this time with a newfound peace of mind.

Rh disease is still a scourge

Within a year of RhoGAM’s debut, nearly every pregnant Rh-negative woman in the United States, Canada, and most of Europe received the drug, saving the lives of millions of Rh-positive babies. For their work, Gorman, Freda, Pollack, Finn, and Clarke received the Lasker Award in 1980.

Nonetheless, Rh disease is still a scourge in many other parts of the world.

“I was very happy that Rh disease was eliminated [here], as were all my colleagues,” Zipursky said at the P&S discussion. “But about 10 years ago, I suddenly realized that maybe Rh disease is not gone.”

Vincent Freda (back row, right) and John Gorman (front, middle) with other recipients of the 1980 Lasker Awards. Photo: Albert and Mary Lasker Foundation/National Library of Medicine

It is one thing to invent a cure; getting that cure into the hands of mothers in poor countries is another challenge.

To that end, Zipurksy and Vinod Bhutani, MD, a neonatologist from Stanford University, founded CURhE, the Consortium for Universal Rh Disease Elimination. This organization seeks to extinguish Rh disease worldwide by increasing access to and affordability of RhIg. They are joined in this endeavor by other groups who sent representatives to the P&S panel discussion: Funmi Banire, founder of a Nigeria-based non-governmental organization, Rhesus Solution Initiative, and Gerard Visser, MD, PhD, a Dutch obstetrician and member of the International Federation of Gynecology and Obstetrics (FIGO).

“I thought the problem of Rh disease was over,” Visser said, “until CURhE showed it still exists in half the world. Three hundred thousand children dying or being handicapped every year is just too many. We know preventative measures are always preferable. It’s so easy. Why aren’t we capable of doing the easy thing?”

RhoGAM is now produced by Kedrion Biopharma, which co-sponsored the 50th anniversary event with the Vagelos College of Physicians & Surgeons.